Do you know the factors that affect the mixing quality of the mixer?

Horizontal spiral belt mixer is suitable for mixing powder and powder, particle and powder, powder and a small amount of liquid. It is widely used in chemical, pharmaceutical, food, feed, plastic and building materials industries. It can be made according to GMP standard. 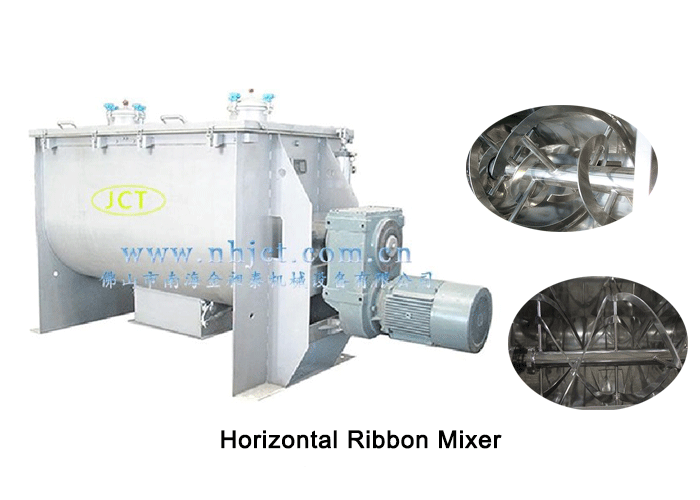 1, the impact of aircraft

Because convective mixing is the process of moving materials from one part of the stack to another in clusters, coarse, lumpy mixing can be achieved quickly; on this basis, more surfaces can be used for fine, intergranular mixing. Therefore, the mixing speed of the mixer based on convection is bound to be faster, such as the horizontal spiral belt mixer. Moreover, the physical and mechanical properties of each component had less effect on the mixing effect than the diffusion based machine.

Diffusion based machines, such as roller mixers, etc. The mixing effect is slow and the mixing time is long. The difference of physical properties (particle size, particle shape, specific gravity and surface roughness, etc.) has a great influence on the mixing effect. But the mixing between particles can be carried out more carefully.

The structure and manufacturing quality of the mixer have a great influence on the mixing quality. If the width and angle of the inner and outer rings of the horizontal mixer are not reasonable, the material will accumulate to one end, affecting mixing time and mixing uniformity; unreasonable structure may cause material dead angle; poor welding quality of struts, rings and shafts, concave and uneven, easy to hang materials, etc.

It mainly refers to the proportion of materials, particle size, roughness of particle surface, moisture, dispersibility, agglomeration and the composition of particles. The smaller the difference of these physical characteristics, the better the mixing effect, and the more difficult to separate after mixing. In addition, the smaller the proportion of a component in the mixture, the larger the dilution ratio, the less likely it is to mix. In order to reduce the re-separation after mixing, viscous liquid components, such as molasses, can be added near completion to reduce its dispersion and thus reduce the separation effect.

3, the impact of operation

In addition, some special materials, such as vitamin B2, are easy to produce electrostatic effect and are absorbed on the wall, affecting the mixing uniformity. For this reason, the body should be properly grounded; grease, water content of materials will produce viscous mixing and cutting will also stick to the wall, so it is necessary to mixer internal treatment, such as internal mirror polishing, no dead angle design, and other such as full-open discharge design.