Rosin is also called pine paste, rosin, pine fat, pine gum, white rosin, pine liquid, rosin, is a wonderful preservative and insect repellent. Rosin has a protective effect on gastrointestinal smooth muscle. "Bao Puzi" said that the rosin is warm, the five internal organs, in addition to heat, for people to seasick and prevent asthma. Li Shizhen believes that turpentine is "long-serving, light and not old, and prolonging." 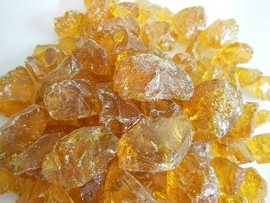 Rosin resin is a light color, highly polymerized (dimerized) high softening point, high viscosity, and better oxidation resistance, and completely resistant to crystallization in liquid state or in solution, its various uses These include paints, desiccants, synthetic resins, automotive inks, floor tiles, rubber compounds, fluxes, solder pastes, and a variety of adhesives and protective coatings.The rosin resin is glycerol (pentaerythritol) ester of glycerin rosin and maleic anhydride rosin adduct. Rosin ester is a pale yellow transparent solid, which is an important raw material for lacquering. The varnish made of it has improved drying property, hardness and water resistance.

The rosin-modified phenolic resin is still characterized by a conventional synthetic process. The one-step method is characterized in that the phenol, aldehyde and other raw materials are directly reacted with the rosin, and the process form is simple, but the control requirements of the subsequent steps are higher; the two-step method is characterized in that the phenolic condensate intermediate is synthesized in advance, and then the rosin is used. The system reacts to form a low acid value, a high softening point, and a resin having a considerable molecular weight and a certain mineral solvent solubility through each specific reaction stage 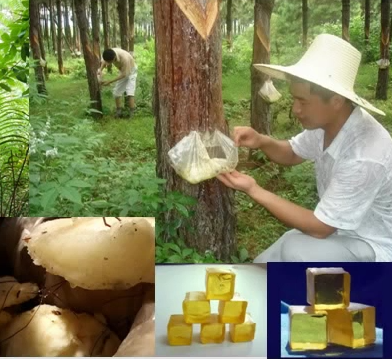 Synthesis of a resol phenolic resin: an alkylphenol is added to the molten rosin, and the paraformaldehyde is present in the form of granules in the system, and then decomposed into monomeric formaldehyde to undergo polycondensation reaction with the alkylphenol.

1 Under the action of a special catalyst, formaldehyde forms a plurality of resol phenolic oligomers containing a large amount of active methylol groups in a solution of an alkylphenol. Since the system does not have an inhibitory action of rosin acid, it is possible to synthesize a condensate of more than 5 phenol structural units. 2 Polyol and rosin are esterified at high temperature, under the action of alkaline catalyst, the desired acid value can be reached quickly. 3 In the reacted rosin polyol ester, the synthetic resol phenolic resin was slowly added dropwise, and the rate and temperature of the dropwise addition were controlled, and the dropwise addition was completed. The temperature is dehydrated to finally form the desired resin.

The advantage of the one-step process is that the waste is removed in the form of steam, which is easy to be treated environmentally, but the phenolic condensation reaction occurring in the molten rosin is easy to produce many side reactions due to high reaction temperature and uneven dissolution, and thus the detection and quality of the condensation product. Adjustment is difficult to control and it is difficult to obtain a stable resin product. The advantage of the two-step method is that a phenolic condensation oligomer having a relatively stable structure and composition can be obtained, and each reaction stage is easier to monitor, and the product quality is relatively stable. The disadvantage is that the traditional phenolic aldehyde condensate must be neutralized by acid, and can be reacted with rosin after repeated rinsing and de-salting with a large amount of water, thereby generating a large amount of phenol-containing wastewater, causing great damage to the environment and extremely labor-intensive.

The one-step and two-step process is a problem that has long been a focus of ink manufacturers. However, the recent development of the process route for the synthesis of phenolic condensate by the no-clean method has effectively promoted the rationalization of the two-step synthesis process route.